An Italian tugboat Ursus began its service in the Regia Marina sometimes during June 1940 and was renamed “F-94”
It’s first missions were done in the relative safety of the North Adriatic and the crew of 18 along with the captain Ettore Da Nuccia got posted for another one on the 30th of June 1941. The Mission was to tow GM-239 armed pontoon from the then Italian port of Zadar (then Zarra) to Albania. Armed pontoon were floating artillery stations used mostly in rivers and swamps too shallow to allow normal ships to be effective. GM-239 was carrying 2 149mm cannons, a 76mm anti-aircraft cannon and 2 9mm machine gun stations and was manned with a crew of 49 men and a high officer. Ursus was comparatively very lightly armed, only with a 76mm gun.

The mission started favourably with good weather and moral among the crew was high, the plan was to be on the island on Lastove (Lagosta in Italian) in the early afternoon of 31-st. However the easy sailing was stopped in the morning. A submarine ,the most successful of it’s class, “HMS Rorqual” was sighted just a few hundred meters from the Ursus bow. After the first barrage of small gun fire and 4-inch shells Ursus was left paralyzed, it was hit right in it’s boiler room and a fire was spreading fast. The ships crew barely managed to cut the towing line and drop a life boat over the side when a tremendous explosion sealed the ships fate. Only 6 of the crew and a injured captain managed to board the lifeboat while all other hands perished with the ship.
Due to constant fire from the GM-239 and a Yugoslav scouting airplane being seen the “Rorqual” dove beneath the waves and fled to international waters. The first naval battle in the east Adriatic was over and the winner was clear.

The worst was yet to come to the crew of GM-239 and the Ursus survivors. Without any propulsion they were left to the mercy of the sea, and that day no mercy was given. A massive storm showed up from nowhere causing the death of 10 more seamen who tried to escape with lifeboats. GM-239 was found the day after by a Yugoslav tugboat, battered and completely unoperational. It was towed to Dubrovnik and later to Albania.

Ursus was believed to have sank somewhere close to the island of Korčula so it was a big surprise to Nenad Milosavljević, a local diver from Vis, when he found it just 400 meters from the inlet of Pločica, right next to Vis island.
The wreck today stands upright in the deep and dark waters. It’s shallowest point is at 43 meters and the ships propellers stand at 65 meters making this a technical dive. The strong currents also make the dive dangerous and from times change the visibility from christal clear to chocolate milk in a few hours. The ship is very well preserved considering the beating it took in it’s last moments. The superstructure is very damaged with the ships funnels laying across it, the emblem of “Rimorchiatori Riuniti”, the original owner of Ursus, still clearly visible on them.
The most impressive part of the ship is the 76mm gun on it’s prow, still looking like it can be used.

The inside of the ship is well preserved but also protected by Croatian laws as a war grave so treat it with respect. 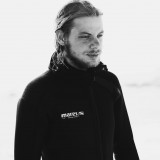 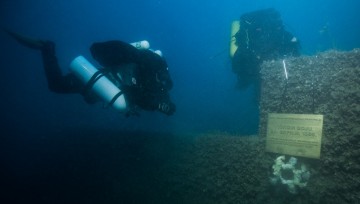 Diving The wreck that changed the course of history. 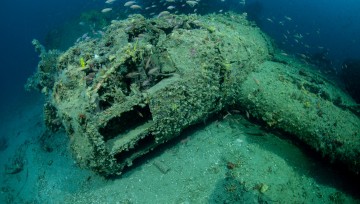 Diving Another one added to our roster.

Expedition to new B-24 Liberator wreck